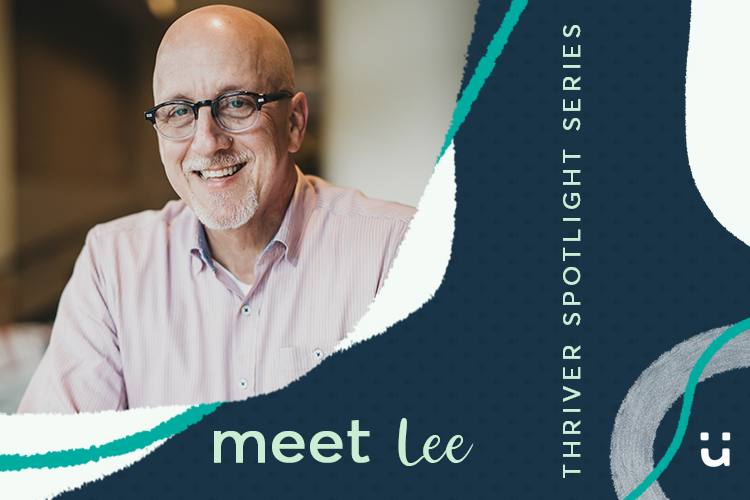 Our bud Lee is a loving, compassionate, and wise man who inspires everyone he talks to, whether in-person or on his podcast. Between juggling health challenges, a full-time job, and a growing cancer podcast, Lee made time to chat with us about his story.

ICYMI: we went live on Instagram with Lee in October as part of our Thriver Thursday series — check out the convo here!

Lee’s always been an open book about his cancer experience, which started with a rare form of pediatric kidney cancer diagnosis called Wilm’s Tumor at age five.

When routine tonsillectomy lab results showed alarming proof of cancer in little Lee, his family was thrown for a loop. The doctors went forward with surgery, but not the one he was supposed to have. They left his tonsils (to this day!) and took his kidney instead, after which he was hospitalized for two weeks.

He remembers everything, but it was a different experience than having cancer as an adult. “I just wanted to know when I was getting my next toy,” he said.

Cancer wasn’t as common in the 1960s, let alone with young kids. Lee’s parents were hesitant to discuss the “C” word with anyone, including within the family. But that didn’t mean they weren’t there for him at every appointment, hospital stay, and recovery process. It wasn’t until Lee had children of his own that he realized the emotional burden of his parents.

Despite the disease’s low recurrence rate, cancer was still a constant in his life as he continued regular tests and scans well into his twenties. The tests continued, but Lee kept the fear at bay: “If this were to happen again, I wouldn’t be shocked,” he thought.

Thriving (Again) as an Adult

Unfortunately, childhood wasn’t the last time Lee would hear the words “You have cancer.” Four decades later, Lee was re-diagnosed with Stage 2 colon cancer in 2011 after turning 50 and having his first colonoscopy. He joked, “My doctor gave me a birthday present.”

Despite hearing, “You should be fine” multiple times, Lee’s been thriving with Stage 4 colon cancer for over 10 years after the cancer had spread to his liver, lungs, and back again to his liver.

Lee felt truly speechless for the first time when cancer metastasized back on his liver in 2019. The cancer experience is always full of surprises, but Lee is practicing mindful, positive thinking to cope.

He still experiences scanxiety but preaches to himself that negative thoughts won’t change the outcome. He focuses on the “right now” instead. One trivia fact that enforces this:

“Humans are the only mammals that can trigger fight or flight with our thoughts.”

“There’s support out there – find your tribe.”

Back in the sixties, there weren’t a lot of support groups (let alone global online communities like buddhi). Lee knows this type of community would have been a life-changing resource for his parents while he was navigating childhood cancer.

Thankfully, his cancer experience as an adult has been full of support and a lot of conversation. Lee invites cancer thrivers and survivors onto his podcast, WE Have Cancer, to chat about their experiences. The podcast’s name says it all: healing can be collective if our stories inspire others.

He’s incredibly thankful to his wife of nine years, Linda, for helping him enjoy life. Other support groups and resources he loves include The Colon Cancer Coalition, WEGO Health, Lyfebulb, and the Man Up to Cancer Facebook group.

What Lee likes to do for fun: Go to hockey games and concerts with his wife, play guitar, and play with their grandsons

Follow Lee’s story at @wehavecancerpod and listen to his interviews with cancer patients, survivors, caregivers, and more on WE Have Cancer podcast.