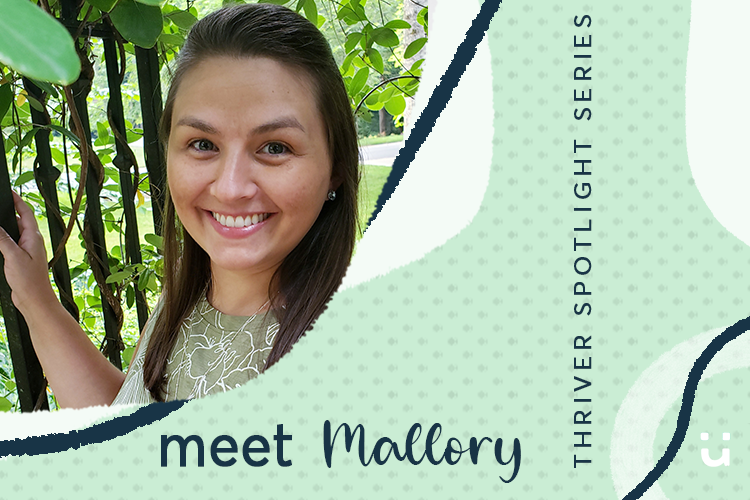 Like a luna moth changing behavior with the phases of the moon, our bud Mallory is a beautiful soul who has navigated the waxing and waning of life with cancer while focused on the light.

Mallory was diagnosed with cancer multiple times over the last decade -- first Hodgkin's lymphoma, then breast cancer twice. She’s passionate about reducing shame in the cancer community, eliminating comparison, and connecting with other buds online.

ICYMI: we went live on Instagram with Mallory in August as part of our Thriver Thursday series — check out the convo here!

Mallory was fresh out of college and ready for new beginnings when she began her wild ride with cancer. Doctors discovered a tumor after running tests to address her constant throat-clearing and heavy fatigue, and she was diagnosed with Hodgkin’s Lymphoma.

With the help of chemo and radiation, Mallory came out hopeful on the healing side of her treatment. But unfortunately, that wasn’t the end of her cancer story.

She was diagnosed with breast cancer in 2017 that was caused by the radiation from her treatment five years prior. This one hit differently; she knew this situation was possible, but wasn’t mentally ready for this to happen -- and so soon.

She had a double mastectomy and felt the common fog that anyone with body-altering surgery endures.

Even though her original radiation caused secondary cancer, she doesn’t regret it: “That [HL treatment] was a win, and that’s all you can do. There’s no right or wrong way to treat it, and whatever decision you make at the time is what you make.”

Meds helped Mallory pull out of her depressive fog, but little did she know her next beast was on the horizon. In 2020, she was diagnosed with Stage IV metastatic breast cancer. Mallory recently celebrated NED status, but that doesn’t make the survivor’s guilt any easier.

Certain thrivers and survivors have heard it before: “You got the easy cancer.” But as we all know, cancer is cancer. As a multi-cancer thriver and survivor, there was no comparison -- every diagnosis knocked her feet out from under her.

“I don't want anyone ever to feel like they are less than because their cancer wasn't as hard or their treatment wasn't as hard. It’s all hard.”

Mallory said it could be hard to find support groups that aren’t JUST one type of cancer, which is why she was drawn to the inclusivity of buddhi.

She also found sharing her diagnosis and treatment on social media felt natural for her. Her openness could bring awareness to cancer charities and causes, helping increase the visibility of thrivers. People like Mallory are making a difference in our small but mighty club!

Let’s get to know her better!

What brings her joy: Making others happy, spending time with family and her dog, and being in the sunshine.

Wellness rituals: Walking and using Headspace app for meditation and before bed.

Mallory wants everyone to know that they’re worthy of love, and that believing in yourself is so important. Reach out to Mallory on buddhi anytime or follow her at @malloryroyal.