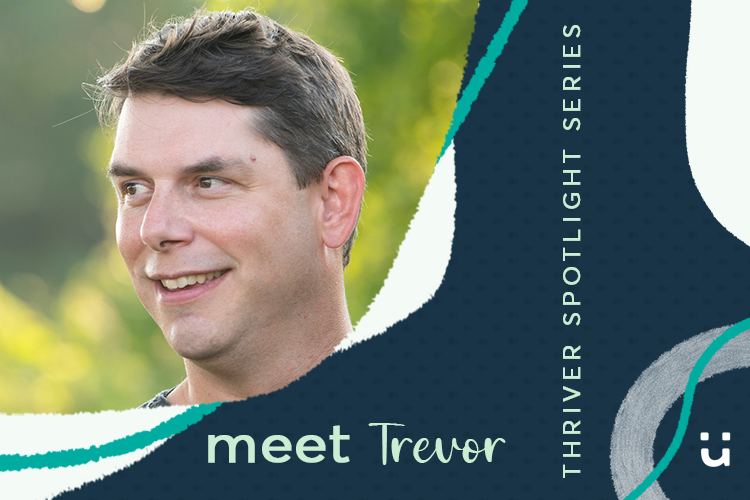 Trevor is a loving dad to two teenage daughters, a storyteller with a background in journalism, and the founder of Man Up to Cancer, a community for men to connect and avoid isolation throughout their cancer journeys. Here’s his story.

ICYMI: we went live on Instagram with Trevor in December as part of our Thriver Thursday series — check out the convo here!

Trevor was diagnosed in March 2018 with stage IV metastatic colon cancer. Since his diagnosis, he’s had four major abdominal surgeries and endured chemo and immunotherapy treatments. Now for the first time in four years, Trevor is in “watch and wait” mode — and this wolfpack leader found the anxiety of being on surveillance a new beast.

As the founder of Man Up to Cancer, Trevor is an active cancer advocate and is open about his personal experiences. But it hasn’t always been easy for him.

Despite growing up in an emotionally expressive household, Trevor had mental-health lows during cancer, where he couldn’t pick up the phone to talk to someone. In the early days, the last thing he expected was to be the advocate he is today.

“Surgeries and chemo are hard. But the emotional burden is way harder. I get support for my mental health, and I encourage others to do the same.”

Learning to share more of his experience as a cancer thriver helped him cope, transforming him into an advocate for men in the cancer community.

Creating Man Up to Cancer

After struggling to open up about cancer, Trevor knew there was a need for other men like him to feel supported and avoid isolation in this season. The goal was to act on what it meant to be “a real man,” which he said is “one that’s brave and strong enough to accept help.”

He started Man Up to Cancer’s private Facebook group in January 2020, which then led to a website and podcast that summer. The group currently has over 1,400 members from across the globe. (They have cool merch, too. 👀 )

Enjoys: Hanging out with his family, mountain biking, walking with his dog Grace, and chatting with the guys in the Man Up to Cancer community.

Joining online communities like Colontown and starting Man Up to Cancer opened the doors for Trevor to meet people he can do life with after having felt the toll of isolation.

“I remember being on the floor of my bedroom thinking I was going to die and leave my kids,” he said. “Once I started meeting people and my tribe, I didn’t feel alone.”

Therapy has been a valuable tool for Trevor’s coping and recovery. But there’s still a stigma around seeking out mental health resources, especially for men. In Man Up to Cancer, even the toughest guys are encouraging each other to go to therapy. “They’re complex men who can still maintain their toughness and be vulnerable,” Trevor said.

Trevor’s interview goes more into the “why” of building Man Up to Cancer, how they’re changing the manly cancer game, and plans for next year.

You can follow along with Trevor and the Man Up to Cancer community on Instagram @cancerwolves. If you’re a man looking for a cancer support community, request to join the private Facebook group Man Up to Cancer - The Howling Place.